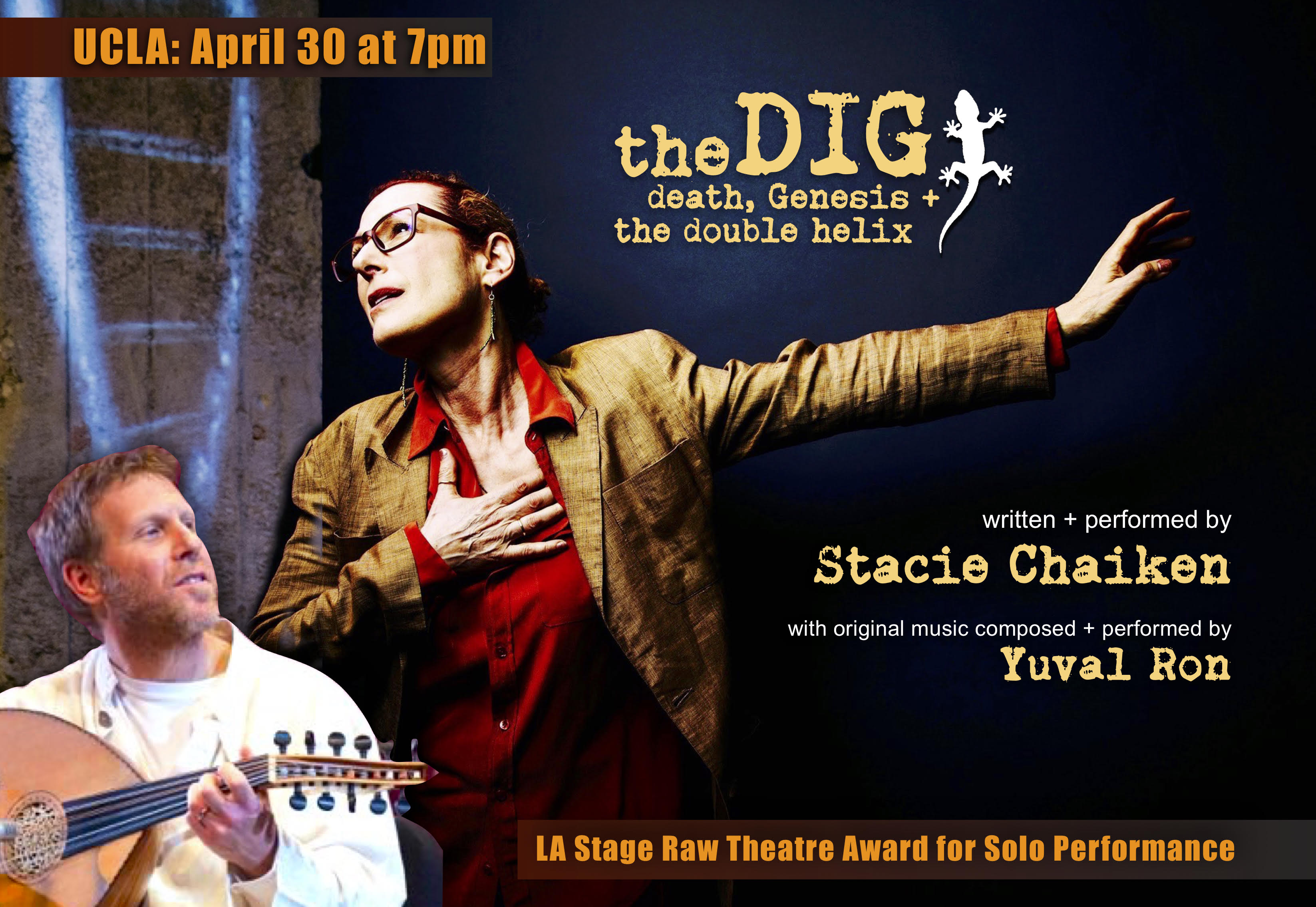 Free & open to the public

In April, we are proud to present Stacie Chaiken’s acclaimed solo play The DIG with new music, composed and performed by world musician Yuval Ron.

The DIG revolves around a mystery: The Israelis have discovered a 4000-year-old burial in a sarcophagus in Jaffa. What is it? How did it get there?

But the real story is about Sally Jenkins, a world-renowned genetic archaeologist, who has been summoned to Israel to answer these questions. At the top of the field of ancient DNA, Sally has discovered a way to clean away eons of dirt and dust and replicate the material necessary to identify ancient burials, using infinitesimal fragments of bone.

Traveling to Jaffa the morning after her mother's death, she finds herself in a place where the mess of history — her own and that of the land she is working in — cannot be so easily cleaned away.

The world premiere of The DIG was produced at Los Angeles Theatre Center, Jose Luis Valenzuela and the Latino Theater Company.

The DIG received the 2017 Stage Raw Award for Solo Performance

In The DIG, playwright and actor Stacie Chaiken plays Sally Jenkins, an American archaeologist renowned worldwide for her ability to extract genetic information from ancient bones.

In the performance, Sally is summoned to a dig in Jaffa where the Israelis have discovered something they fear might topple the precarious political, historical and religious balance in the region. Sally is the only person in the world who can tell them what it is.

Her partners in this adventure are Israeli antiquities operative David, Arab-Israeli expert in text and artifacts, Rashid, and Mo, the lizard she finds in the bathtub in her suite in a five-star hotel.

Based on Sally’s findings - scientific and otherwise - she, David and Rashid together make a choice that is uncharacteristic, possibly reprehensible, and certainly transformational.

The DIG seamlessly traverses the worlds of archaeology; science and biochemistry; Biblical text; Jewish history and identity; the history/story of the land of Israel Palestine; modern Israeli culture, ethics; genetics; epigenetics; mother-daughter meshugas (craziness); the Holocaust and generational trauma - in the realm of families and nations and peoples.

"Chaiken has created an intricate, multi-layered tale that combines archeology, religion, Israeli-Palestinian politics and personal issues, with each strand of the narrative reflecting back on the others. Her play deals with the complexities of Israel during the Second Intifada, her relations with her co-workers David and Rashid, and her growing relationship with the lizard she found in the bathtub of her luxury hotel." - Neil Weaver, Stage Raw

"The DIG is a little gem and will both enlighten and entertain audiences." - Elaine Mura, LA Splash

Stacie Chaiken is a writer-performer and the principal creative force behind The DIG. The Los Angeles-based Chaiken's work has included a variety of solo performances as well as leadership of several devised-theatre projects with diverse communities, including immigrants, recovering drug addicts, LGBTQ youth, interfaith youth and Orthodox women. Her current work includes consultation and leadership of other creative projects in Los Angeles, including acting as Story Consultant for New Ground: a Muslim-Jewish Partnership for Change and as facilitator of story workshops for the organization's fellows. A Fulbright Senior Specialist in the field of Performance and Story, she was formerly on the performance faculty of the University of Southern California School of Dramatic Arts.

Yuval Ron is an internationally renowned and award-winning World Music artist, composer, and record producer. In addition to his leadership of The Yuval Ron Ensemble music and dance group, Ron has created scores for a number of plays, television series and films, including the Oscar-winning short West Bank Story. His music is influenced by his continual research into various ethnic musical traditions and spiritual paths. This research has included producing field recordings in the Sinai Desert with the Bedouins, archival preservation recordings of the sacred Yemenite, Moroccan and Andalusian Jewish traditions, and the album of a famed Sufi master musician, Omar Faruk Tekbilek. Ron's musical achievements have been recognized with a a variety of awards and grants from the National Endowment for the Arts, American Composers Forum, California Council for the Humanities and the Rockefeller Foundation.

Pamela Berlin is a New York-based theater director. Her credits include dozens of plays in New York and across the Northeast and Canada as well as several operas. She has participated in the Sundance Playwrights Institute, Chautauqua, Theatreworks Palo Alto, Cape Cod Theatre Project and the New York Theatre Workshop Dartmouth Summer Residency. She taught directing in the MFA program at the Mason Gross School of the Arts at Rutgers University for twelve years, acting in the MFA program at Brooklyn College, and frequently directs at Juilliard and the NYU Graduate Acting Program. She is a long time member of the Ensemble Studio Theatre and served as the President of the Society of Stage Directors and Choreographers from 2000 to 2006. Berlin received her BA in American History and Literature from Harvard University and her MFA in Directing from Southern Methodist University.

Tim Labor is an award-winning Professor in the Department of Media and Cultural Studies at the University of California, Riverside who specializes in music composition and sound design for theater and film. Prof. Labor's pre-recorded score for the 2016 premiere production of The DIG at the Los Angeles Theatre Center helped earn the production a nomination for the 2017 Los Angeles Stage Raw Theatre Award for Sound and Projection Design. At the April 30th production, a trio of world musicians from the UCLA community will perform live Prof. Labor's musical score for the play. As a film and media composer, Labor has collaborated in composition or sound design for a variety of projects, including computer games, video, dance, and theatre and has been recognized for his work with a number of prestigious awards. 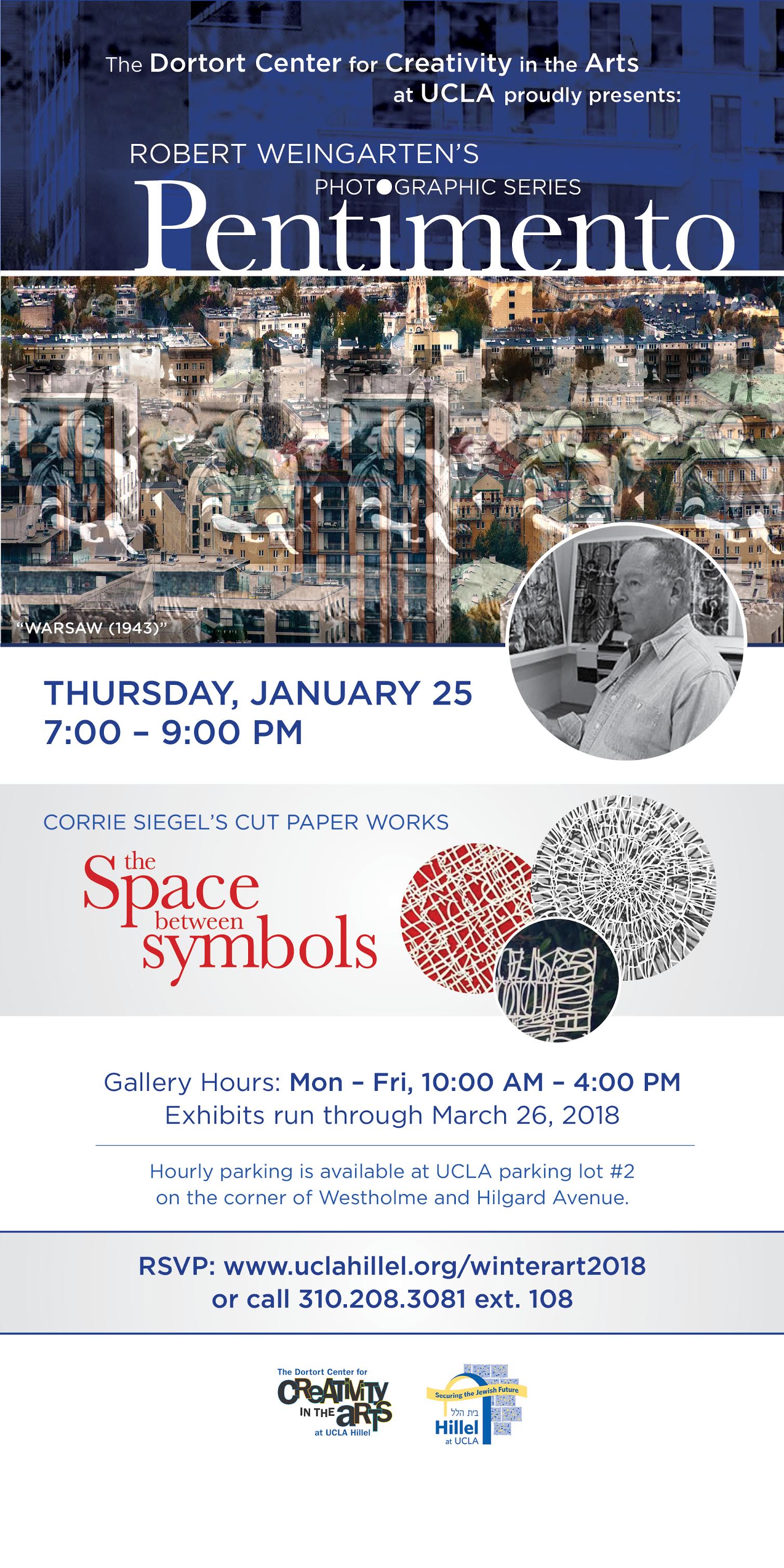 Robert Weingarten describes Pentimento,  his recent body of work, as “a re-affirmation of the power of photographic  memory.” Beginning with historic photographs that document major events of the  last hundred years, Weingarten re-visits the original locations of these  pictures and then makes photographs of the site as it exists today. He notes  that, in these places, life goes on and there are often no reminders of the  profound or tragic events that occurred there in the not so distant past. An  Italian painting term, Pentimento is defined as “the presence or  emergence of earlier images, forms or strokes that have been changed and  painted over.” Weingarten’s work is a seamless layering of his photographs with  the vintage images, a digital process he calls a “translucent composite.” 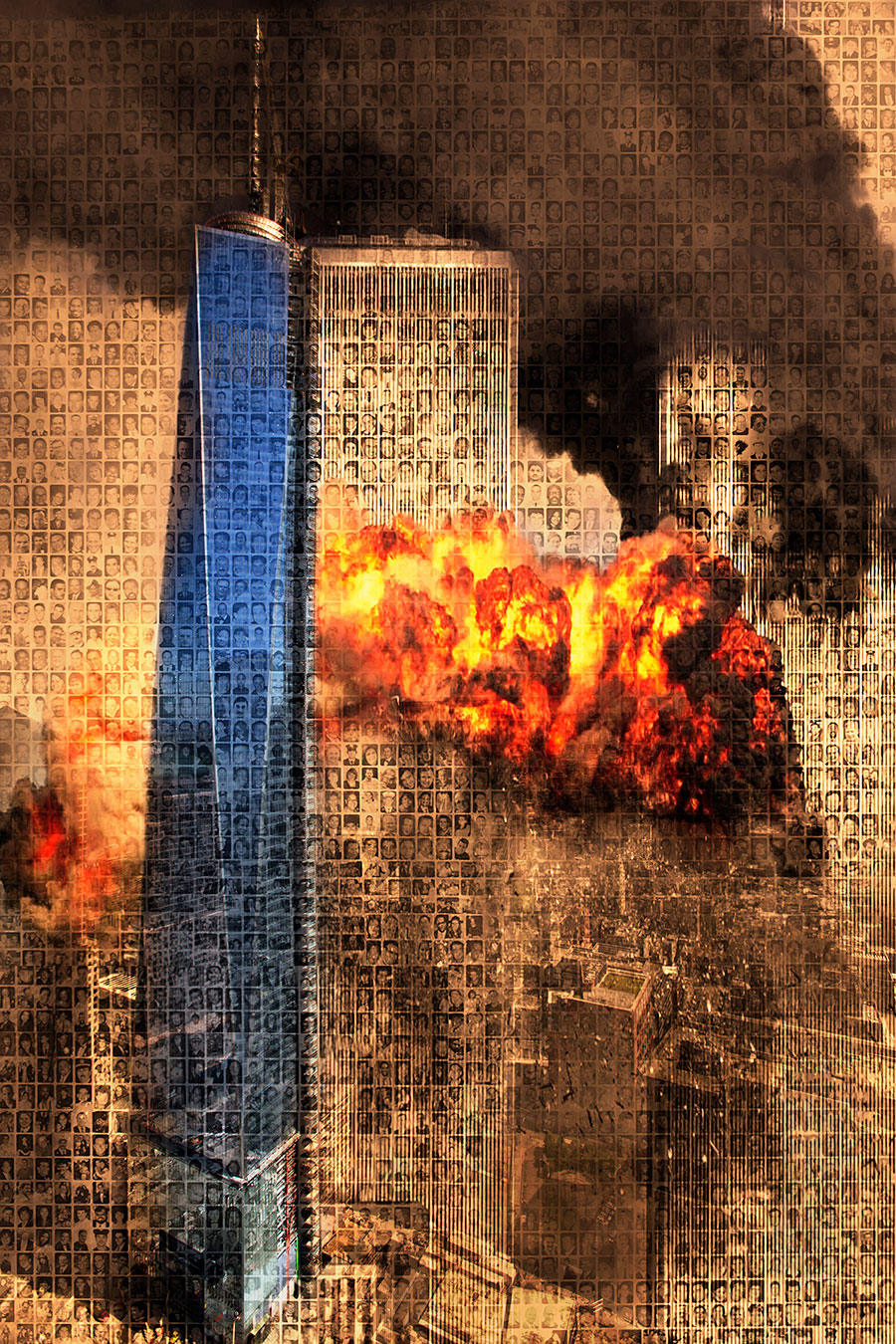 The Space Between Symbols 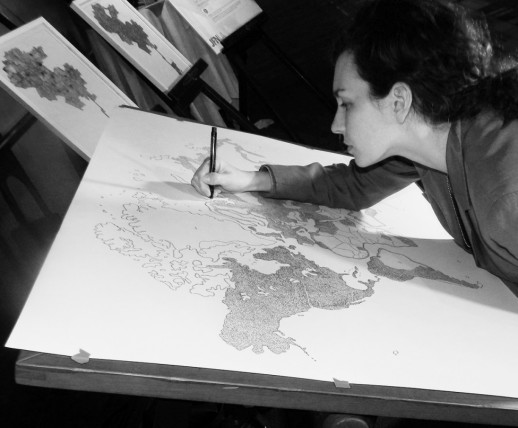 An artist, curator and educator, Corrie Siegel is committed to using the arts as a method of personal philosophic exploration as well as a tool for community building.  Siegel’s works often explore identity and experience within a global system of communication. She plays with personal limitations of knowledge and understanding by using highly detailed observation, and involved processes for collecting and rendering her subject matter.  She has exhibited her work throughout the United States as well as internationally. Her projects have been profiled in the Los Angeles Times, Mousse Magazine, and Flash Art International.  Siegel is a founding member and co-director of Actual Size, an artist collective and gallery. Actual Size collaborates with established and emerging artists to activate the exhibition space and engage the public.

The cut paper works that comprise this series are created through overlaying text in a matrix to obscure the original message and reveal a pattern composed of symbols. Intricately detailed, the work is inspired by micrographic art by Hebrew scribes who sculpt, skew and stretch letters to create dynamic and textured compositions. The artist chose to dissect texts written in German including Hitler's "Mein Kampf". Through using the form of a traditional paper-cut, these loaded texts are abstracted and cut into fragile lace.

The paper-cut was once exceedingly common in Ashkenazic-Jewish homes, reaching its height of popularity in the 19th century into the early 20th. Paper-cuts served religious and other ritual needs, such as indicating the direction of prayer, remembering family deaths, holiday decoration, and warding off the evil eve. Artists adapted the cut paper technique that Jewish merchants had met through their travels to the Far East in the 14th century as well as the 17th century German paper-cuts, which were known as Scherenschnitt (scissor-cuts). In 1345, Rabbi Shem-Tov ben Yitzhak ben Ardutiel wrote The War of the Pen Against the Scissors. In this Hebrew text he recounted an occasion in which his inkwell froze on a cold winter’s evening. In order to continue his studies he resorted to cutting the letters out of the paper.

Created by Hebrew scribes in the late 9th century while transcribing the Masorah, which includes a system of marginal biblical notes that counted and listed textual details, this style of forming minute text into imagery enabled scribes to render images without blatantly violating Jewish law forbidding representation. This art form spread with the Jewish diaspora and evolved within the local cultural milieus. Micrography exemplifies the Jewish tradition of retaining identity while adapting to and affecting the local culture. Micrography also demonstrates the enduring Jewish pursuit of interpreting and navigating their evolving traditions.

The narratives underlying Sarah’s death and Rebecca’s marriage release a hidden midrashic theme. We will explore sources that suggest a common dynamic. 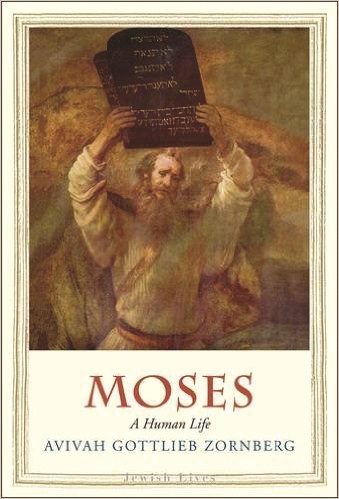 Co-sponsored by: The New Center for Psychoanalysis (NCP) in Los Angeles

theatre dybbuk in association with the Dortort Center

World Premiere of the play

Written and directed by artistic director of the theatre dybbuk

This event has reached maximum capacity

Inspired by the stories of the lost tribes of Israel, theatre dybbuk presents a full-length theatrical work, rich in movement, original music, and lyrical language that relates ancient mythological and tribal narratives to contemporary questions of integration, appropriation, and belonging.

In the early eighth century BCE, the Neo-Assyrian Empire conquered the Northern Kingdom of Israel, from whence it has been said that ten of the twelve ancient tribes of Israel were deported and assimilated. These tribes are now lost to history, with a variety of folktales, legends, and theories about their fates having come about since that time. Some are told from the point of view of those who regard themselves as members of a lost tribe, while others are told from an outside perspective in order to make a case for self-serving outcomes.

Framed in the context of a gallery exhibition, lost tribes weaves together stories from the Assyrian conquest to the present day, tracing a world history of assimilation and dominance; of cultural conquest, annihilation, and survival. The performance incorporates choreography by Kai Hazelwood and a live percussion score composed by Michael Skloff, created in collaboration with Emilia Moscoso Borja and Alex Shaw. The production is written and directed by theatre dybbuk's artistic director, Aaron Henne, and was developed with the ensemble.

Admission: Free and open to the public

Hourly parking is available at Parking Lot #2 on the corner of Hilgard Ave and Westholme.