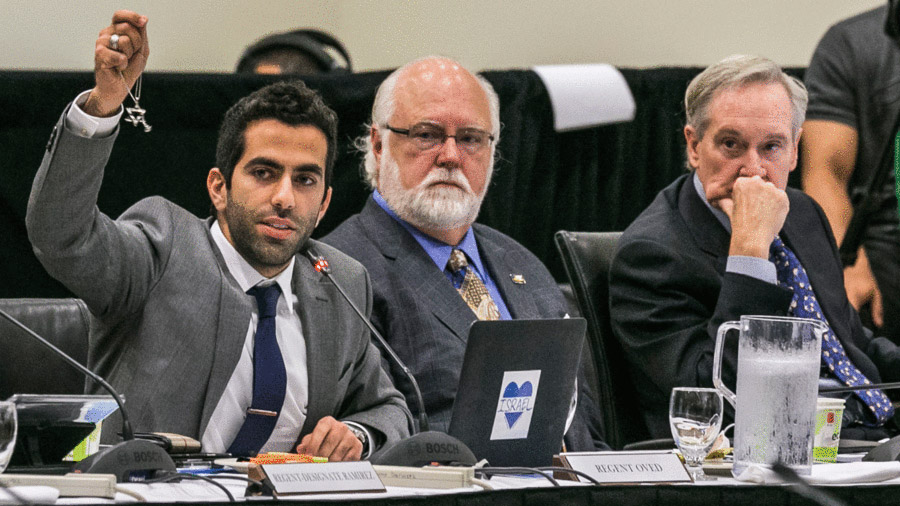 LA Times: "On Thursday, UC regents debated a modern-day sequel: how to allow for free speech while protecting students against prejudice....

"UC student regent [and Hillel at UCLA student leader] Abraham “Avi” Oved, who is from an Israeli American family, delivered a passionate and personal statement. He recounted how his mother had read about an assault on a Jewish woman in Europe who had prominently worn a Star of David on a necklace and that she had warned him to be careful about wearing his. Holding up that chain and star at the regents' conference table, Oved said he did the opposite and began to wear it more openly to show his pride of being “a Jewish Israeli American.”

For the full article, please visit the LA Times.  And see below for a statement from our Executive Director, Rabbi Aaron Lerner.

The UC Regents have recently considered various resolutions with regard to intolerance and anti-Semitism on campus. I want to share with you the latest update.

Today, Jewish students from around the state advocated at the Regent's meeting to ensure that Jews are recognized as a protected minority in the UC system. They demanded a robust and specific definition of anti-Semitism, and specifically advocated for one which ensures that anti-Semitism veiled as anti-Zionism is more clearly understood and addressed.

They successfully pushed back against a proposal regarding intolerance which failed to mention the specific acts of hate directed towards Jewish students. And they succeeded.

Instead of accepting the version proposed today, the Regents will be launching an initiative to address root causes of intolerant behavior, including anti-Semitism. Further, the Regents will attempt to suggest appropriate penalties for those who commit acts of intolerance while also protecting First Amendment rights.

We are encouraged by today's developments and look forward to continuing to support our students and the UC Regents as they navigate this process with grace and persistence.

Wishing you a happy and healthy New Year!