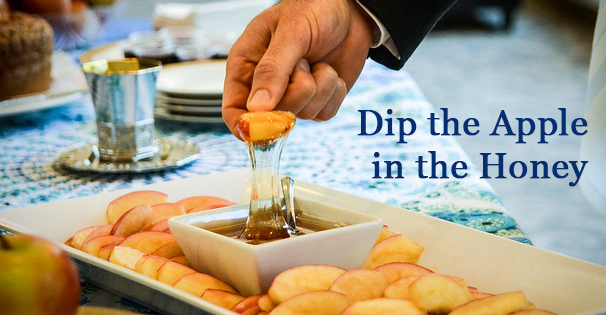 In preparation for the High Holy Days, we have a sweet teaching from Rabbi Aryeh Kaplan, who leads the orthodox services at Hillel at UCLA!

The familiar words from the popular children’s song herald the coming of the New Year in many homes. As one of the holiday’s most popular icons, the apple and honey have become symbolic of Rosh Hashonah and our personal and communal aspirations for a sweet new year.

The Talmud, in two different places (Horayos 12A and Kerisos 6A) records the custom of eating or seeing special foods to leverage blessing for the coming year. The Shulchan Orech (OH583) quotes this custom as normative and the Ramah specifically mentions the custom of eating an apple and honey.

Rationally, the notion of foods affecting the outcome of someone’s year is perplexing.  Could it be that acquiring a sweet new year is as simple as indulging in sweet foods on Rosh Hashonah? In fact, this custom might be less than benign, as it seems similar to a prohibition listed in the Gemara that warns people against forecasting the future based on superficial indicators they encounter.  For example, it would be prohibited to say “so and so's bread has fallen out of his hand; his staff has fallen out of his hand; his son called after him; a raven screamed after him, a deer has crossed his path; a serpent came at his right hand or a fox at his left; do not commence with me.” (Sanhedrin 65B) Wouldn’t eating an apple and honey as a predictor for a sweet new year fall into the same prohibition?

Clearly, simply eating sweet foods does not automatically generate a sweet year.  It is using the items as triggers to inspire prayer that makes them impactful.  Each special food generates a specific Tefilah that beseeches Hashem to shower Bracha upon us.  The food in and of itself has no impact, but it is the qualities of the food that leverage a specific prayer, and motivates the individual to articulate his aspirations for the coming year, that has value.

It is our hope that the table laden with pomegranates, apples, honey, fish heads, beets, carrots, dates and a host of other Rosh Hashonah symbols, should serve as a welcome invitation to realize all that there is to pray for and engage the family and community around meaningful Tefilot for a year full of wonderful things.

Rabbi Aryeh Kaplan is beginning his 16th year as the Ou-JLIC Rabbi in the Hillel at UCLA.