On Thursday, December 12, Rabbi Aaron Lerner, Hillel at UCLA’s Executive Director, was awarded the prestigious Richard M. Joel Exemplar of Excellence Award by Hillel International.  Under his leadership, Rabbi Aaron has driven the engagement of more than 3,000 students and community members at UCLA Hillel. During his tenure, Hillel has expanded annual fundraising to more than $2.5 million to support exponential growth in Jewish identity and pro-Israel programming. 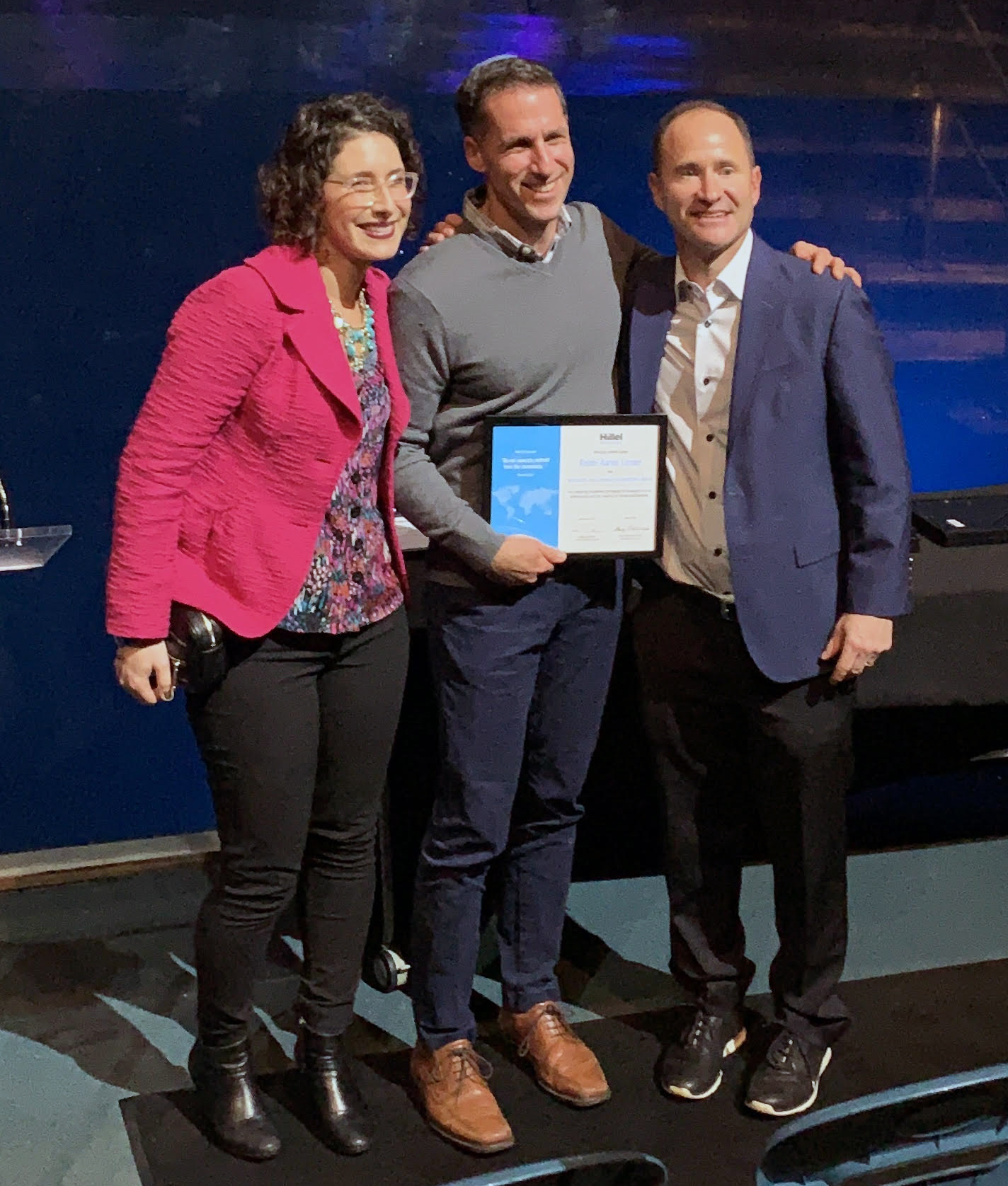 -Rabbi Aaron has emerged as a fresh, new flavor of leadership and his humble, kind, clear direction has made an indelible impression on Jewish life at UCLA.

-Brought into this position with resounding support and adoration by students, lay leaders and staff alike, students consistently report a sense that Hillel is their home - a place to connect, where their voice matters.

-He maintains a perception of neutrality and openness, promoting core values such as respecting others, embracing challenges and fostering transparency all in the spirit of upholding pluralism.

-Rabbi Aaron goes out of his way to connect community stakeholders to the students, emboldening students to build relationships with influential donors and community leaders which benefits the students now and as they ascend to new roles after college.

-He is a dedicated fundraising partner.  He effortlessly weaves concise, compelling stories about our students and the strength of our program, while also navigating the unsavory presence of anti-Zionism and anti-Semitism on campus.

-Aaron has made it a priority to improve the Jewish community’s position in progressive, activist campus spaces and, in partnership with students, has fashioned Hillel as a valuable partner in the interfaith campus landscape.  He brokered the transition of the University Religious Conference to become a grant-making body supporting interfaith campus programs and he currently serves as the President of the Council of Chaplains at UCLA. He has the attention of top UCLA administrators and leverages these relationships for the benefit of the students.

-In the spirit of loosening the grips of divisive proxy-war-type conflicts at UCLA, Rabbi Aaron played a key role in developing and implementing UCLA’s first Fact Finding Journey, a program that brings predominantly non-Jewish campus influencers to Israel and the Palestinian territories.  This trip has since been scaled nation-wide - perhaps your campus even leads such a trip.

-His Rabbinate is empowerment - his eagerness to empower students to hold the reigns of their community is well-known and he would never make a student-facing hire without getting input from students.

-Last year, after 20+ years of effort, he successfully closed an agreement with the University which allows students to use their meal plan cards at our in-house Kosher restaurant, broadening accessibility to Kosher food and more fully realizing our vision of pluralistic inclusion.

-Rabbi Aaron walks the walk!  He has fostered a flexible work environment, demonstrating his belief that his team will do what it takes to get the job done.  He is a true feminist - an eager advocate and ally to women in the workplace - definitely not the type of person who would ever sit on an all male-panel!

-On behalf of your team, Aaron, we thank you for your role modeling, mentorship, vision and dedication.  Rabbi Chaim said it best - you’re a mensch.

Named for the extraordinary man who led Hillel as president from 1989-2003, The Richard M. Joel Exemplar of Excellence Award is presented to those Hillel professionals who demonstrate a solid commitment to Jewish campus life with proven success of their dedication to Hillel International's mission of enriching the lives of Jewish students so that they may enrich the Jewish people and the world.