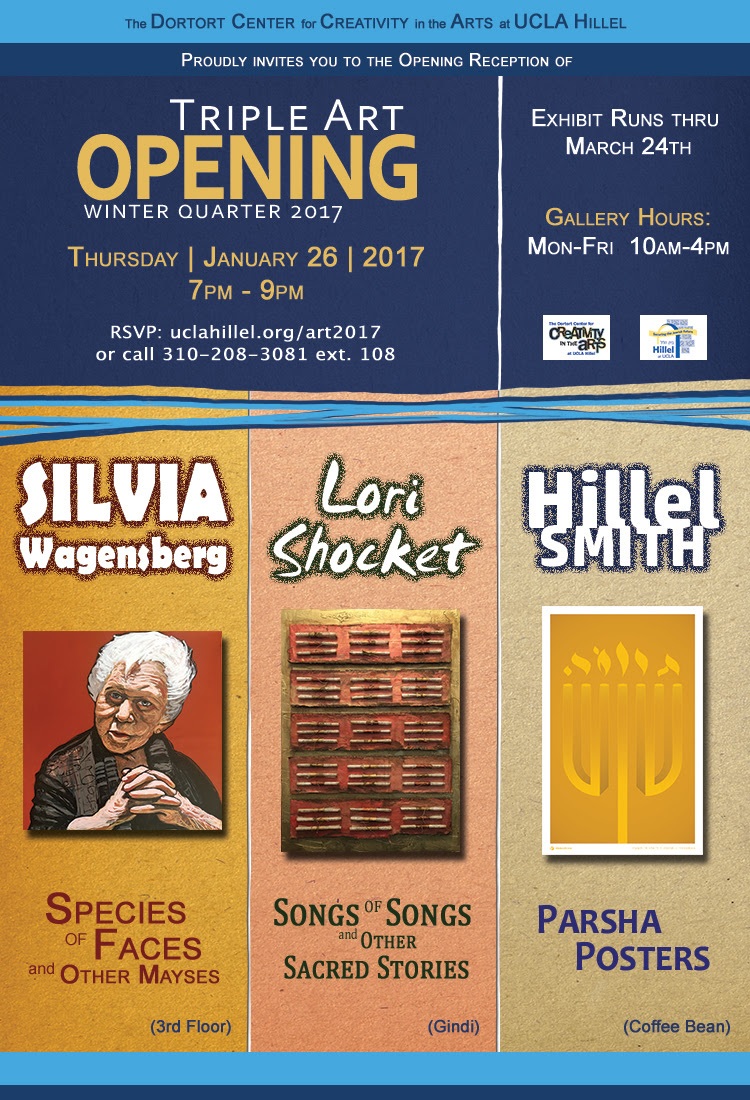 "Species of Faces and other Mayses" by Silvia Wagensberg

Silvia Wagensberg’s latest collection of paintings may seem like no more than a compilation of portraits. In fact, it is also a window to the concerns that have been guiding her most recent painting endeavors. For the past six years, Wagensberg has been studying Yiddish at the American Jewish University and at UCLA, something which has also proven to be an exercise in memory and personal history. Shortly after she began taking these lessons, her teacher Miri Koral introduced her to an intriguing Yiddish reading group that she eventually joined. It is from the ranks of this group that she has recruited the subjects of the portraits she has titled “Species of Faces and other Mayses”. These portraits are also loosely based on a collection of essays by Georges Perec called “Species of Spaces and Other Pieces”, a seminal book by the French intellectual and son of Holocaust victims. The word Mayses in the title is Yiddish for “stories”. Born in 1936 in Paris, France, Perec was a member of the famed group Oulipo, which came to define the literary vanguard of 1960s Paris. The group sought to resolve many of language’s shortcomings through unusual experiments involving mostly word play. Somewhat similarly, Wagensberg seeks to understand larger questions of language and communication through a playful examination of everyday gestures and minutia. As Wagensberg put it, the person behind every painting revealed a rich tapestry of experience to which she was anxious to allot her own type of permanence. The group as a whole presented a linguistic challenge to Wagensberg, where she often found herself both as part of a larger effort to try to preserve a language in trouble while the same time she was nearly unable to keep up with the weekly readings and conversations. As she tries to make sense of it all, her choice of subjects and gestures opens a window to a particular human psychology and behavior that may turn out to be larger than her source Yiddish reading group.
Silvia Wagensberg was born and raised in Barcelona, where she studied visual art at Barcelona University's Faculty of Fine Arts (Facultat de Belles Arts de la Universitat de Barcelona). In her studio in Venice, California, she continues to explore pictorial language in painting through the forms and symbols of the written language. She has exhibited in LACMA's Sales Gallery and in the group show "Honoring Women's Rights" at the Steinbeck center, and has won such honors as the Judges' Choice Award from the Armory Art Center and a Second Prize at the "3rd International Open" at the Woman Made Gallery juried by Mary Ross Taylor (curator to Judy Chicago), among other achievements.

"SONG of SONGS and other sacred stories" by Lori Shocket

Lori studied graphic design and advertising at Art Center College of Design, and although her dream was to become a doctor, she was diverted by a lucrative position for an international beauty/fashion manufacturer, where she spent 20 years producing award-winning ad campaigns, trade show exhibits and packaging.

She earned her MD degree at the age of 56, and now has shifted her focus back to art. She is currently working on educational large-scale presentations that combine both passions. In October 2014, she launched a new community based arts project, The Human Element Project. Her most recent Human Element work has been exhibited in Los Angeles, Baltimore and Melbourne Australia. Lori combines her passion for art and science by creating collaborative installations that are not only art pieces but also the result of community engagement projects where sensitive and powerful stories are told and memories are preserved.

"I identify myself as a mixed-media artist because my work is directly inspired by my culture and my travels. I have a passion for history, traditions and rituals. and I believe that documenting our life’s journey is critically important for a more peaceful and tolerant path for the future. I believe that collaboration, interaction and response are the crutial elemnts to powerful art statements.

My work is based upon making a connection between art, science and the human element. I use the periodic table as the foundation of my work, combining physical elements with emotional and spiritual attributes to create powerful visual statements.

My current work is inspired by the textures and patina created by the erosion of earth’s elements with the passage of time. I depict these chemical transitions with the use of layered acrylic mediums and earth-based metallic pigments to create textured surfaces. These aged surfaces serve as a foundation on which I place small hand-written scrolls that contain messages and personal prayers that I have collected through my work and travels. The tightly rolled scrolls reveal only a small portion of the message, leaving the interpretation and perceived understanding to the viewer’s imagination."

Will be on view in the Gindi Gallery (2nd Floor)


Begun at Simchat Torah 2015, the Parsha Poster project is a series of posters "advertising" the parshat hashavua (weekly Torah portion). The posters utilize innovative Hebrew typography--each one integrates the Hebrew name of the parsha in Hebrew somehow into the illustration--and a bold, graphic aesthetic to tell Biblical stories in a new way.