Mark Strickland: Between Heaven and Hell, Fears and Desires 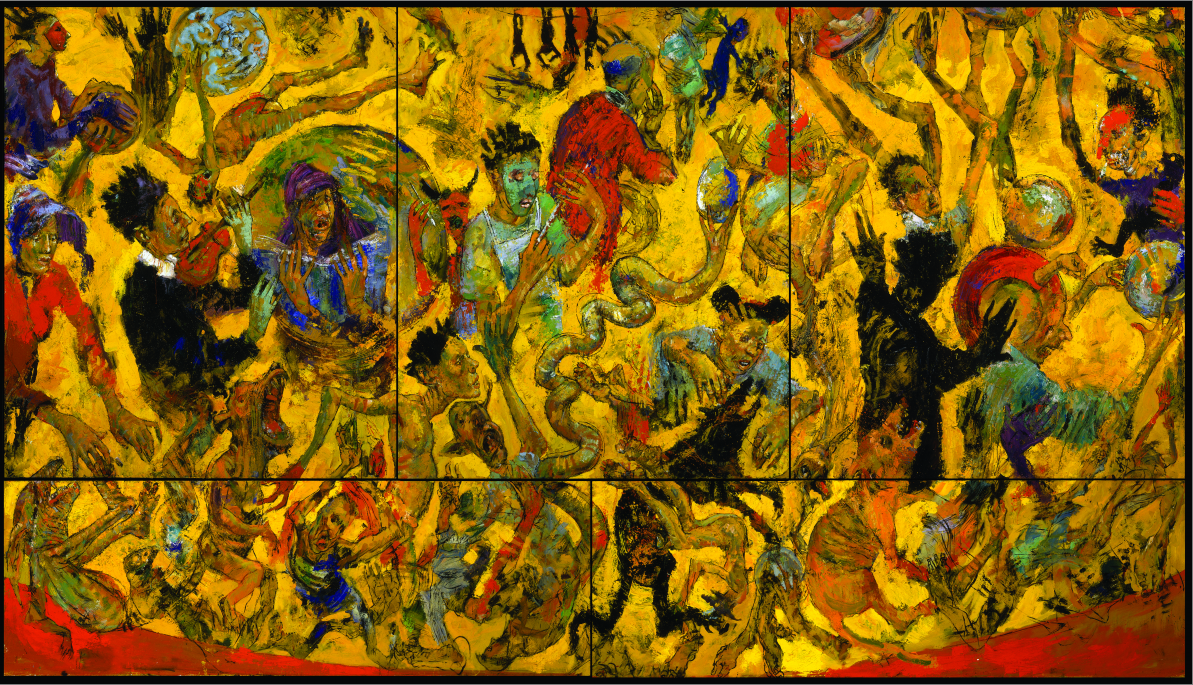 "When I create, I often look at what was expressed through my awareness as if I hadn’t created the work. From time to time I discover a previous painting and do not remember having created it, as though the work came to be from its own longing for itself and not from me.  Painting or any other art form can be a way to turn pain, fear, and anxiety into flowers of calmness and wisdom. It can be used as a meditation for facing our fears from a sacred place of compassion for others, as well as for ourselves.  The exercise of “feeling” that we are made more of light and compassion than of flesh allows us to break down the barriers between us.

In this exhibit Between Heaven and Hell Fears and Desires, I intend to share with you, the viewer, my convictions and beliefs as a humanist artist."

"Mark Strickland, who defies the mainstream with his unsparing depictions of the worst we human beings do to each other. He requires us, no matter our discomfort, to look at it, and to confront our own responsibility. He does so in a scale, and with a passion that brooks no avoidance on the part of anyone who shares his courage to look barbarity, and cruelty, and misery in the face. His works- look at it! Really, look at it! That’s all he asks- is a maelstrom of conflicting emotion: anger, pain, sadness, grief, shame, guilt, it’s all there, upfront, unavoidable.

And then, finally- let’s not forget this, because it might be overlooked- there’s the bottom line, the one below the suffering. Or above the suffering, perhaps. It’s Strickland’s omnipresent, deeply expressed hope for peace and justice in the world."
-Peter Clothier

To hear more about our recent Art Opening with Mark Strickland, Click here

To Mark Strickland, inspired by his sculpture "Mater Dolorosa", by Teresa Lefranc

My children, my little ones,

I look at you and my heart rends,

How I wish I could hold

Each and every one.

And thus, take you to safe harbor.

I can feel your pain,

I am silent witness

Of the tragedy of men.

I have also witnessed with sorrow

The shame and disgrace

How I wish my torch would

Light up the deepest paths

Of the human heart.

There, where the best and worst

Of each one dwells.

Where the fiercest battles

And from where the most

Thus, with that spark,

With that beam, seek

Brotherhood and not separation,

Fortune and not misfortune,

Life and not death

Of the many who clamor

My shelter and protection. 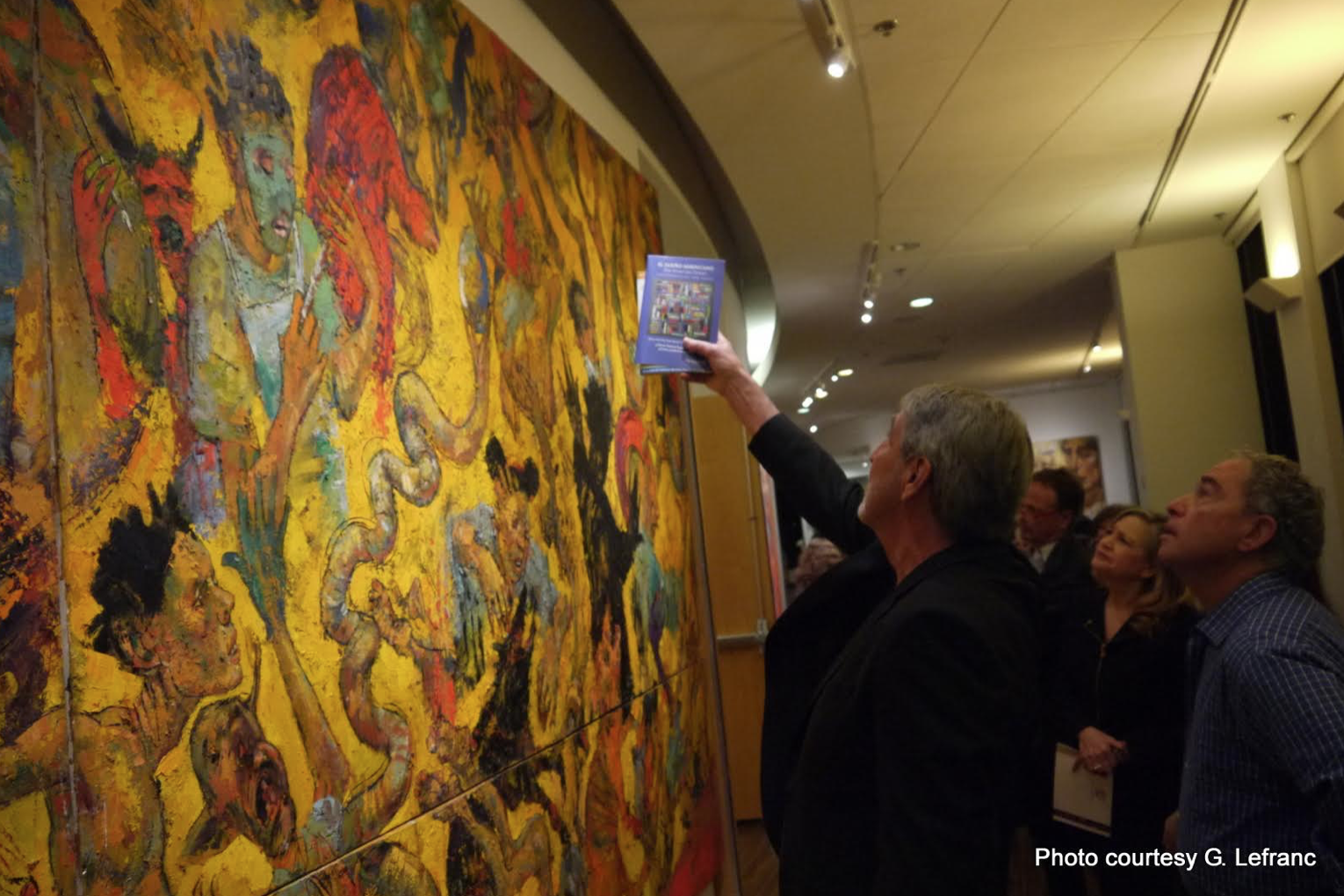 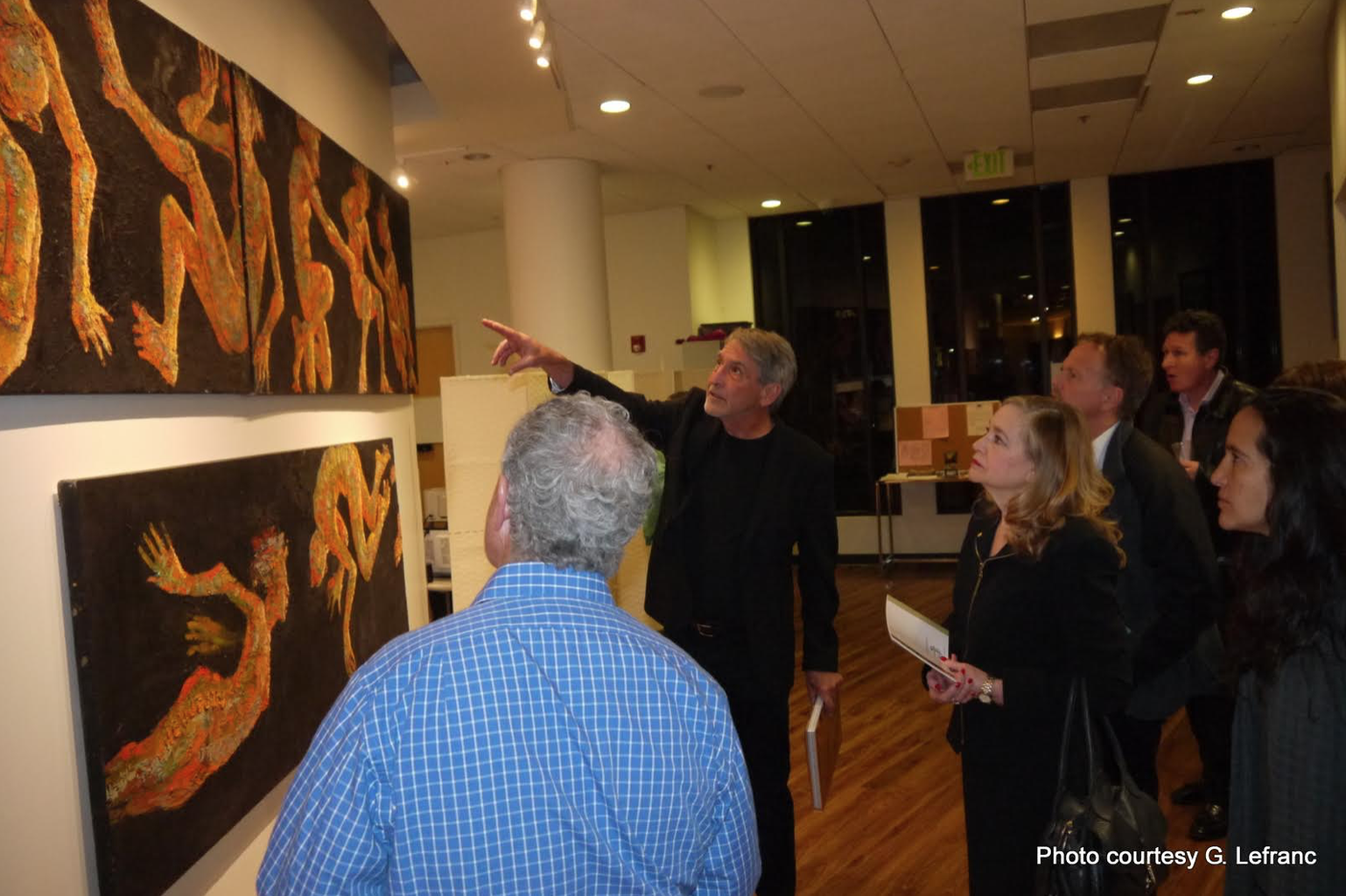 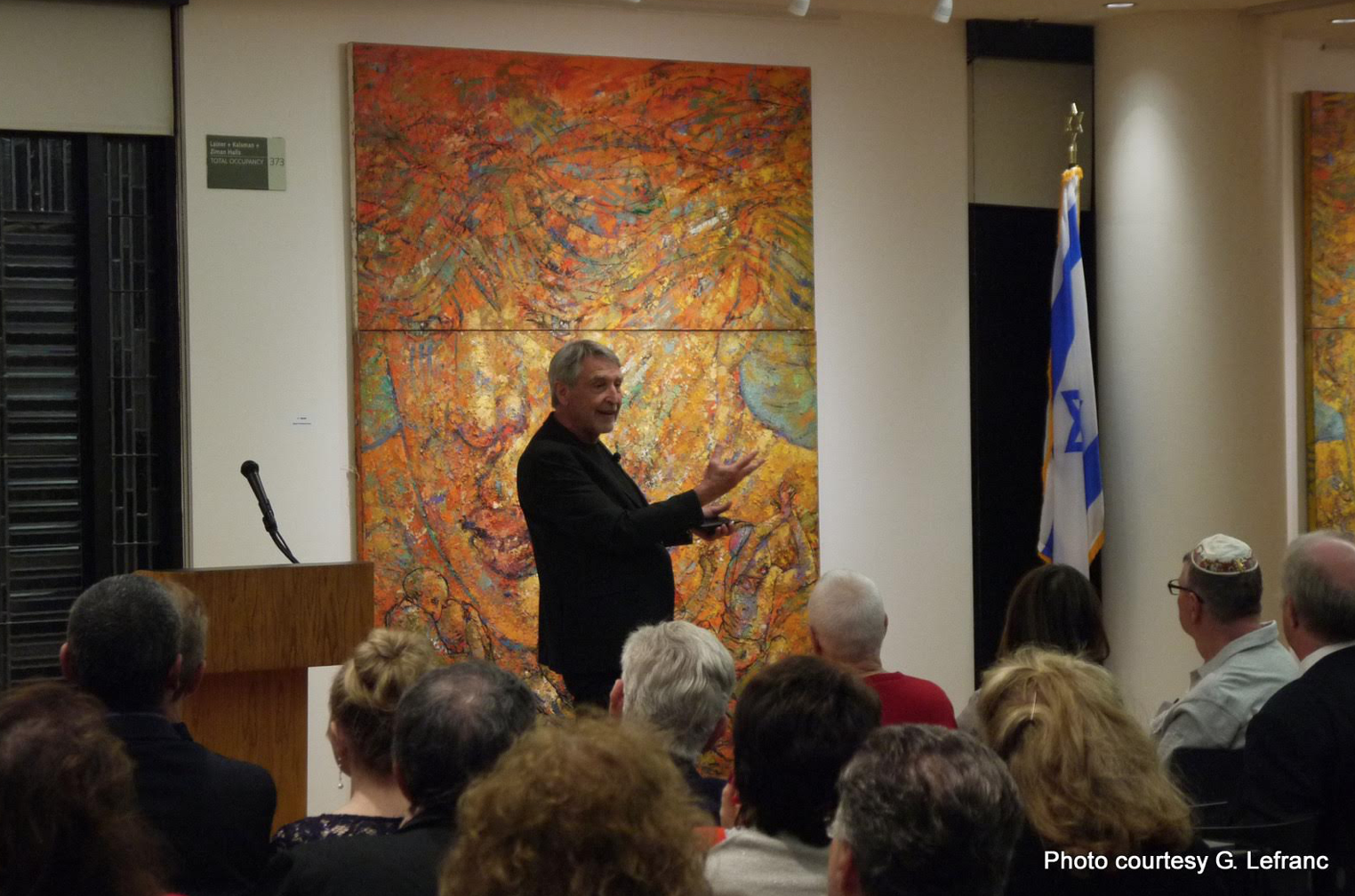 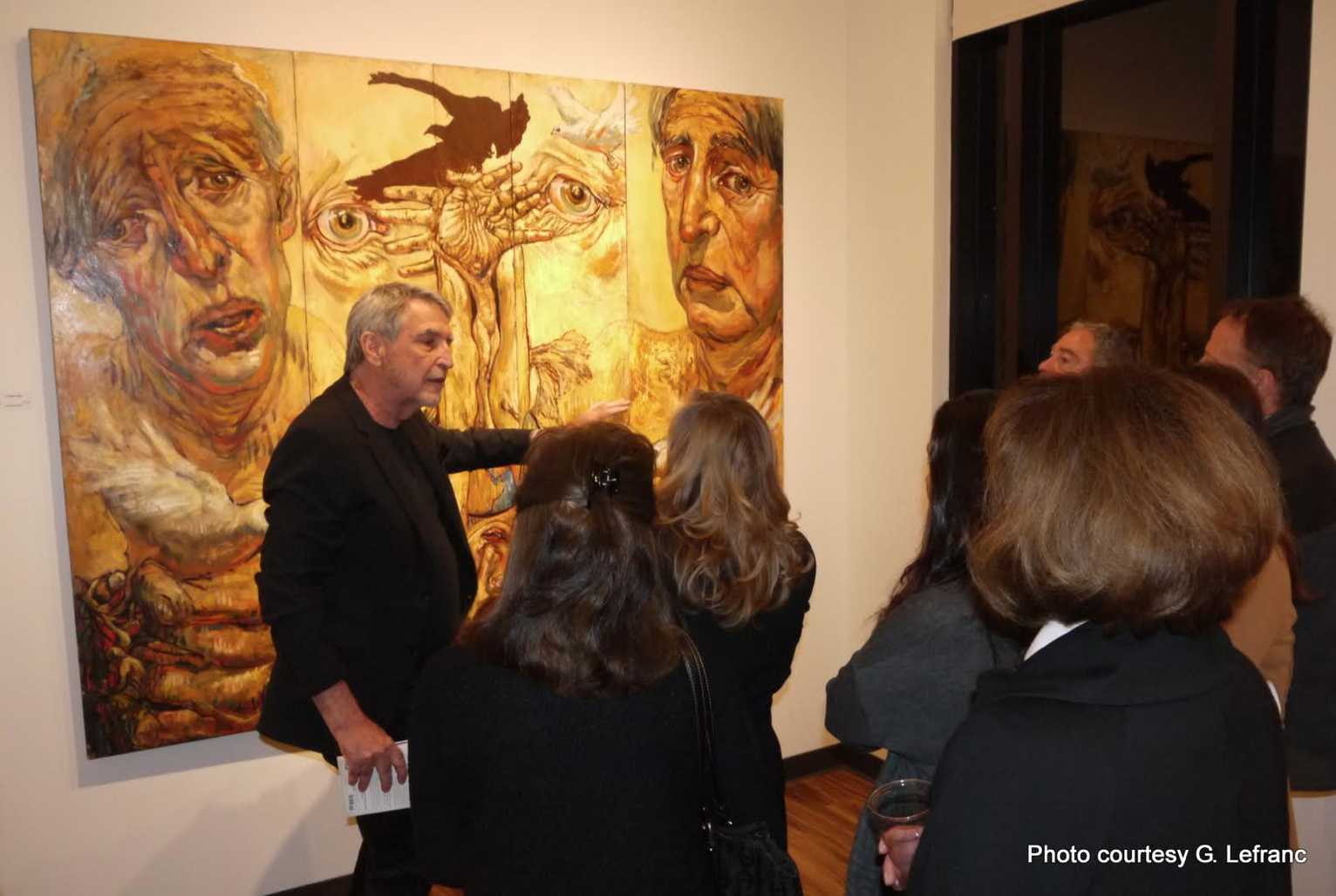 American Jews, Israel and Anti-Semitism in the Trump Era 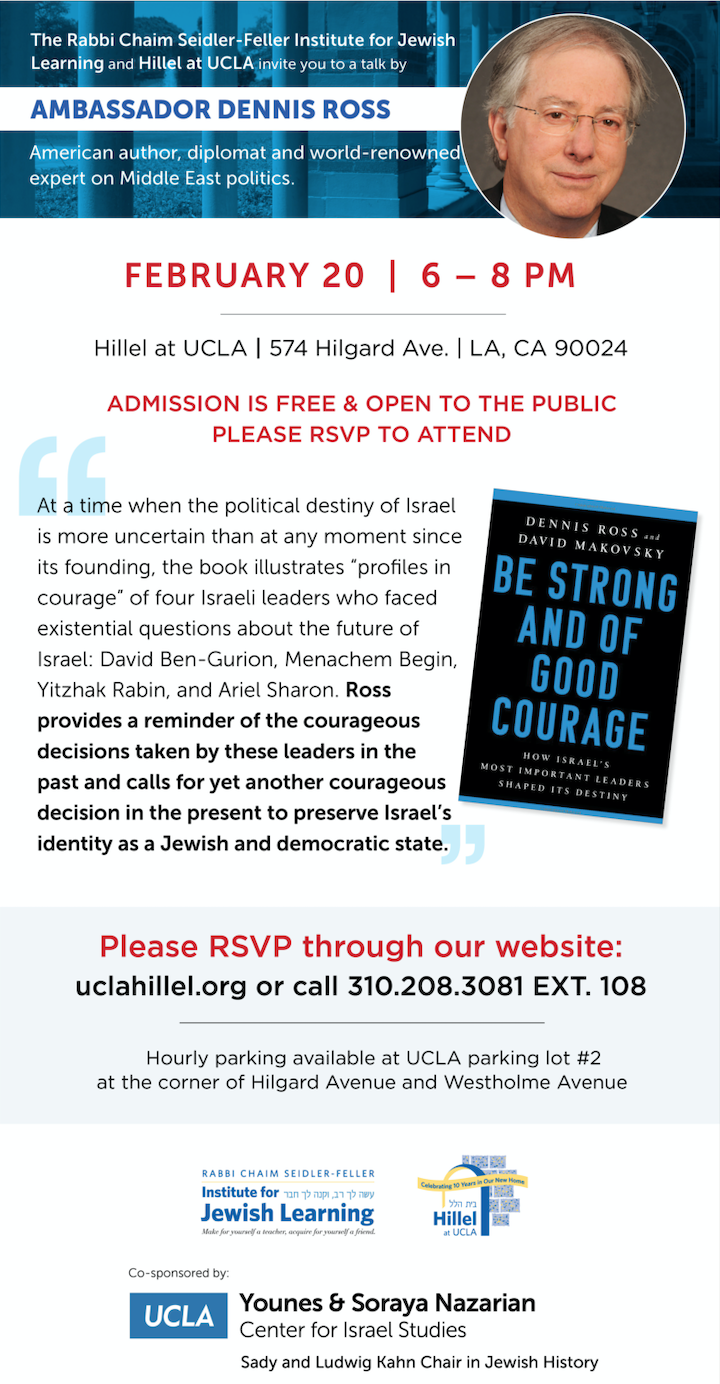 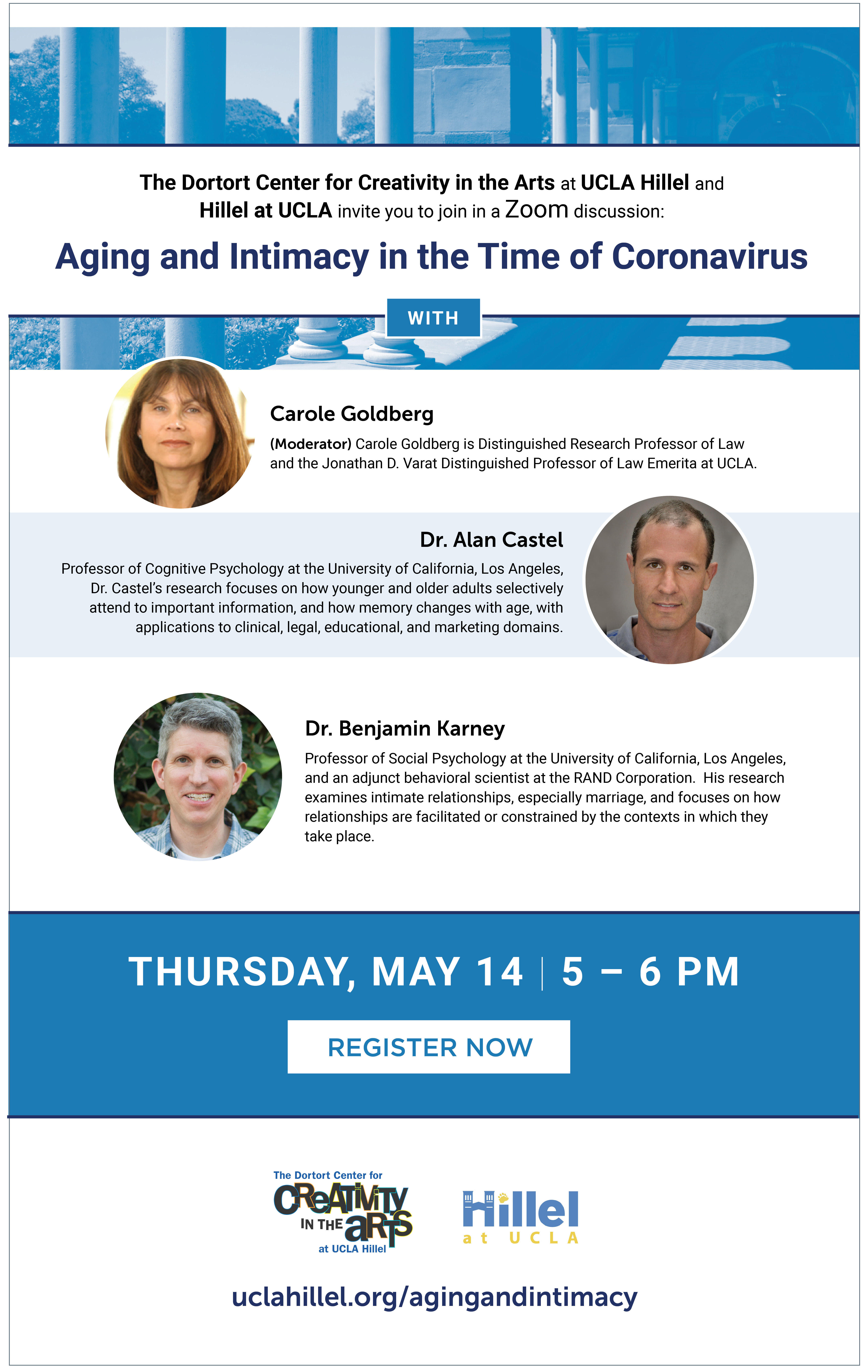 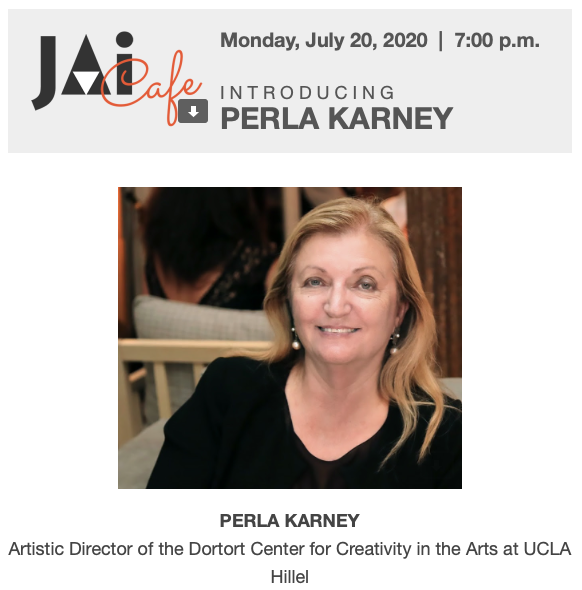 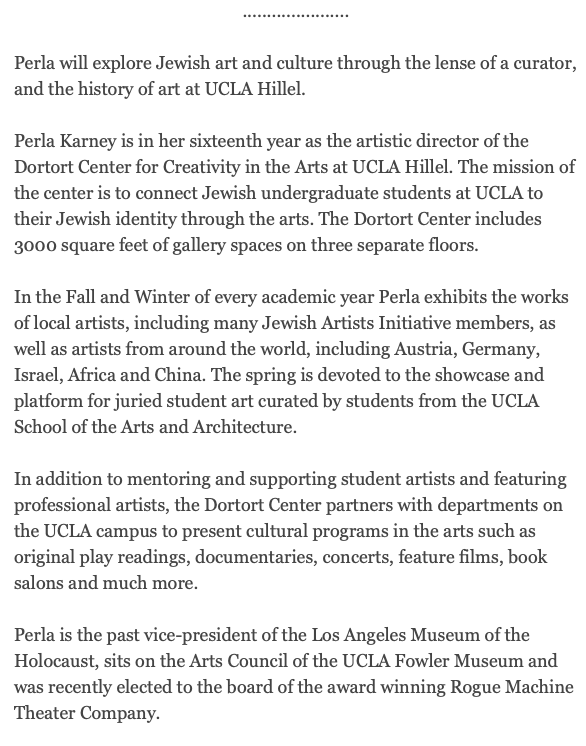 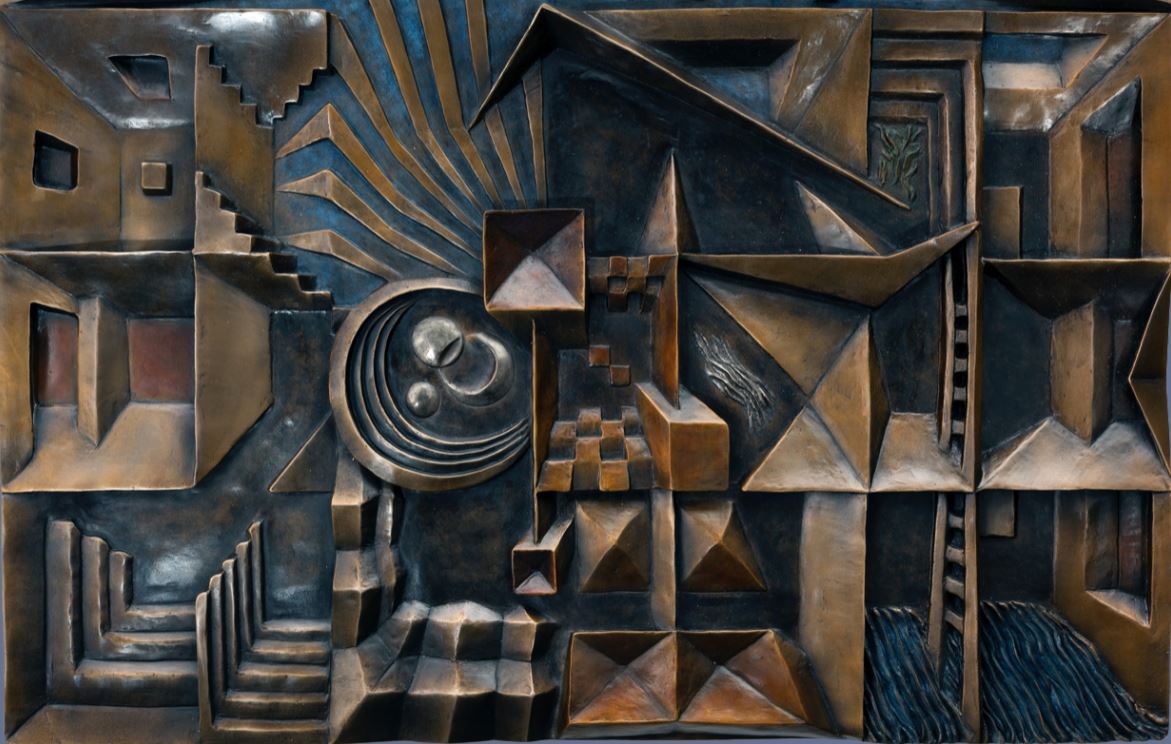 Art serves as a compass to determine and explore our place in the world. It is a fulcrum, linking the physical world with ideas, memory and vision. I have the honor of constantly reflecting a continually changing, perplexing, and marvelous world that we all occupy.

The studio work is a personal view. I strive to visually connect conceptual views to history and to nature. I often combine two and three dimensions. Two-dimensional images create illusions of depth, while three-dimensional art is typically object oriented. Combining the two affords the opportunity to build illusion out of objects and objects out of painting, thereby creating a paradox. This contradiction of dimension mimics our imaginations, perceptions feelings and daily lives. The studio work often addresses life cycles, changes in time and place, and the nature of art itself.

Los Angeles is my original home. My art education was in painting at the University of California, Berkeley, where I earned BA and MA degrees. After two years in New Mexico, I moved just outside of Denver where a former barn is my studio.

“Story Line” is a joy to read, partially because the information is so specific. Partially, too, because the imagery is done with such care and feeling. The booklet-like catalog that identifies buildings that figure into your family history was a brilliant idea. What you wrote about each site makes an engaging story.

To hear more about our recent Art Opening with Susan Cooper, Click here 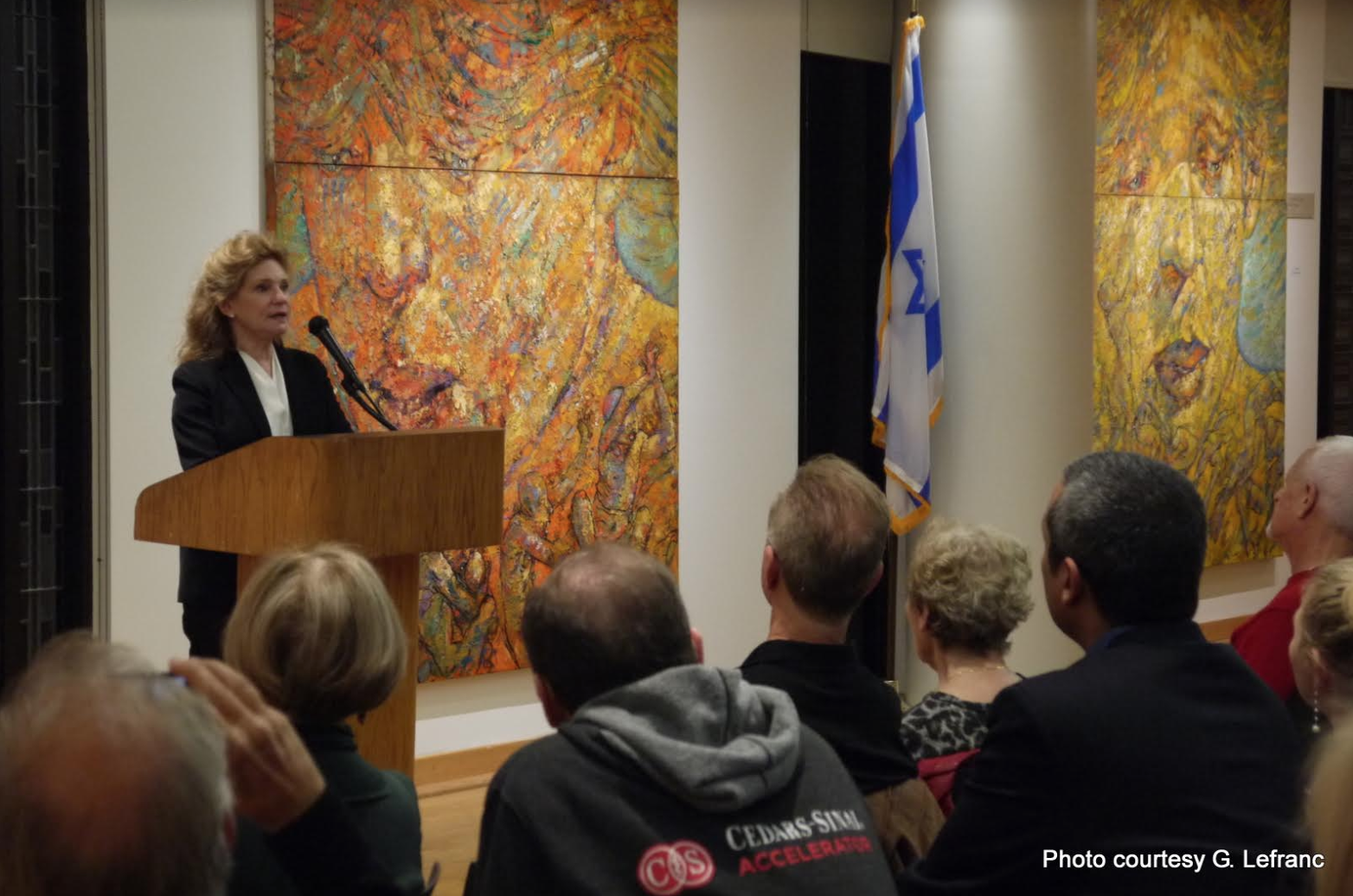 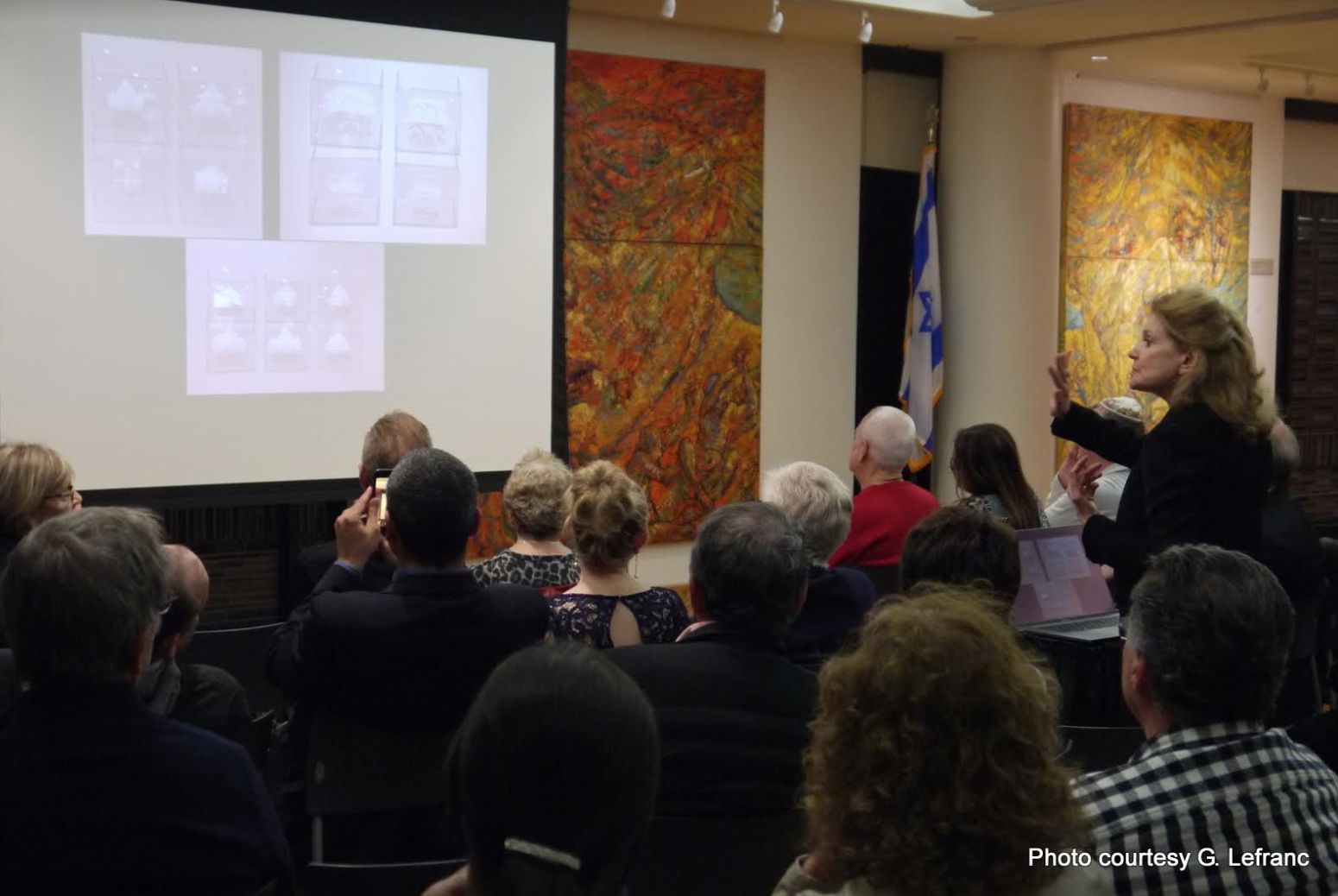 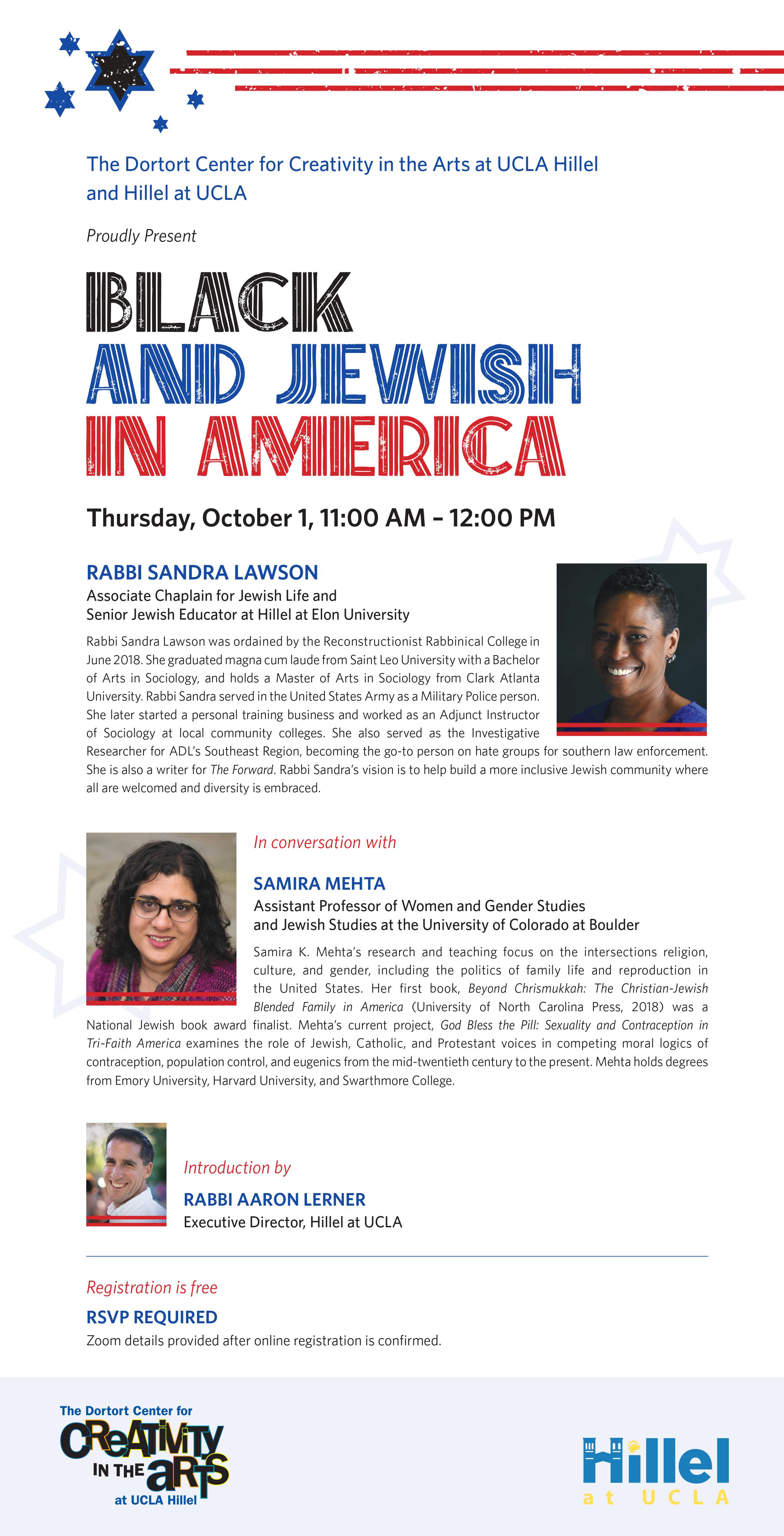 Renowned Iranian Jewish artist Soraya Sarah Nazarian, in an intimate conversation with her daughters Shula and Sharon, will recount her extraordinary journey as an immigrant, an artist and a humanitarian

Moderated by Marla Berns, Director of the UCLA Fowler Museum 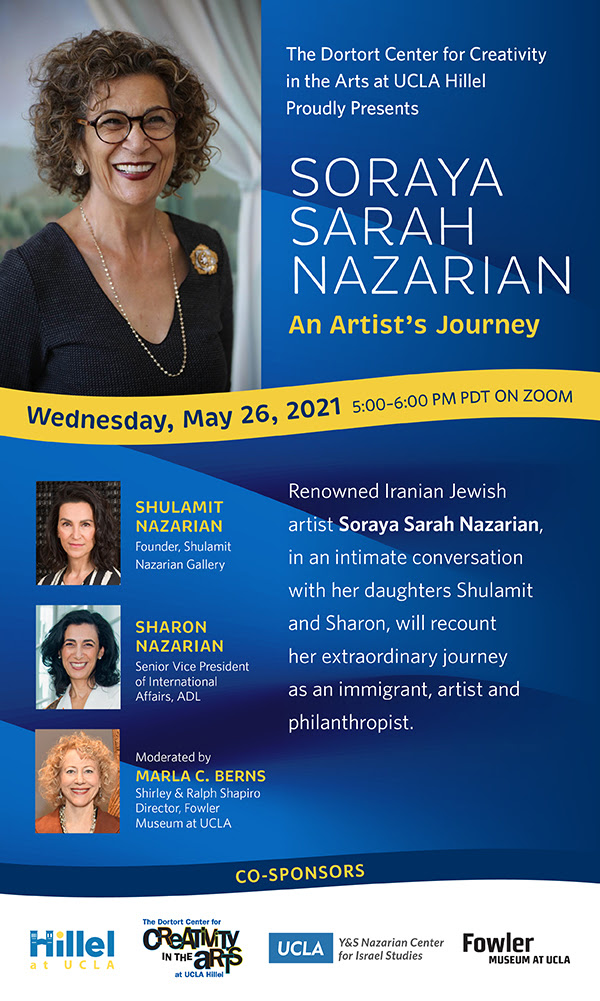 Soraya Sarah Nazarian is an Iranian-born artist. She is a master in direct stone carving. Her work explores themes of motherhood, family, spirituality and Iranian culture.

Soraya immigrated to the U.S. in 1979 with her family. Early in her career, she worked in multiple mediums including  drawing and clay. In the 1980s, Soraya began sculpting at American Jewish University (formerly University of Judaism), and established her own studio soon after.  Her work is distinguished by two major periods: the 1980s-1990s were a time of discovery and experimentation while the 2000s are marked by the creation of large-scale sculptures.

Early experimentations show Soraya’s depth in mastering the female form and in creating abstract compositions out of stone.  These early works often reflected her life experiences - a theme that reemerges throughout her career. Most of her works are based on strong familial connections and a commitment to humanistic values.

In 2000, Soraya traveled to Pietrasanta, Italy, a city made famous for its marble quarries by the Renaissance sculptor Michelangelo.  The experience profoundly shaped her life, focused her technique, and enhanced her relationship with stone.  Since her initial arrival, she has been one of the few women who have personally selected stone from Pietrasanta quarries.

Soraya’s work has been highlighted in various solo and group exhibitions. Strength Revealed (2010), was a 25 year retrospective of her work curated by Barbara Gilbert, curator emeritus of the Skirball Cultural Center and Museum in Los Angeles, CA. Accompanying the show was a catalogue titled Strength Revealed: The Sculpture of Soraya Sarah Nazarian including essays by Ruth Weisberg, Cynthia Burlingham, and an interview with Gloria Gerace. Recent group exhibitions include My Heart Is in the East (2012) an official satellite show of the Fowler Museum's Light and Shadows at Shulamit Nazarian Gallery Venice, CA; Sacred Words, Sacred Texts (2013) at Hebrew Union College, Los Angeles, CA; and 7,657mi exhibition in conjunction with the Jerusalem Biennale (2015) at American Jewish University’s Platt Gallery, Los Angeles, CA and Jerusalem, Israel. Her work is held in numerous private collections.

Cultural, educational, and medical institutions in Israel and the U.S have commissioned several large-scale public art sculptures.  Recent commissions include Sound (2002) at the Jerusalem Academy of Music & Dance in Jerusalem, Israel; Reflections (2007) at Sapir College, near Sderot, Israel; Legacy (2009) at the University of Haifa in Haifa, Israel; Identity (2010) at Saperstein Middle School in Los Angeles, CA; Wings (2014) at The Hebrew University of Jerusalem in Jerusalem, Israel; Love Heals (2017) at Rambam Hospital in Haifa, Israel; Unbound (2018) at California State University, Northridge University, Northridge;  and Dancer (2020) at the Younes and Soraya Nazarian Center for Performing Arts, Northridge.

Soraya lives and maintains a studio in Los Angeles, California.

For over twenty years, Shulamit Nazarian has been an advocate for artists, art education, and the creative community   in the United States and abroad. She immigrated to the United States with her parents and siblings from Iran. Shulamit studied architecture and worked as an architectural graphic designer before she began a successful career as a gallerist, opening the Shulamit Nazarian Gallery in 2012. The Gallery features a diverse program of emerging and mid-career artists and has achieved International recognition for its groundbreaking approach.

As Senior Vice President of International Affairs, Sharon Nazarian heads the ADL’s work fighting antisemitism and racial hatred globally, including in Europe, Latin America, and the Middle East, and ADL’s Israel office. She is also President of the Younes & Soraya Nazarian Family Foundation and founder of the Y&S Nazarian Center for Israel Studies at the University of California Los Angeles (UCLA) and Chairs its Advisory Board.