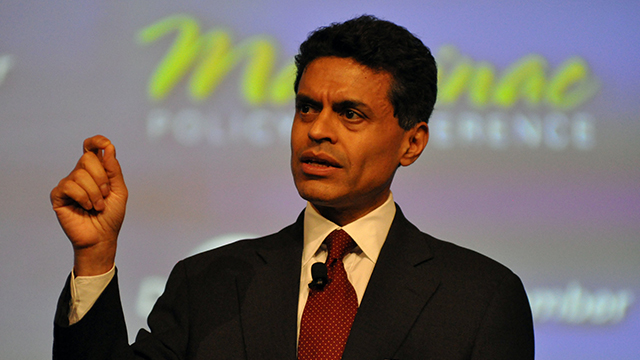 - Ticket sales for UCLA students, staff, and faculty will open on January 16 (tickets must be picked up at the UCLA Central Ticket Office in the James West Alumni Center; UCLA ID required for pickup)

Host of CNN’s Fareed Zakaria GPS, contributing editor at The Atlantic, and Washington Post columnist FAREED ZAKARIA is widely respected for his thoughtful analysis and ability to spot economic and political trends. Esquire magazine described him as "the most influential foreign policy adviser of his generation." Fareed Zakaria GPS, CNN’s flagship international affairs program, has become a destination for those seeking smart commentary and civil conversation about the big ideas and global challenges of our time. Winner of a 2012 Peabody Award, the Emmy-nominated GPS features Zakaria’s fascinating panel discussions and one-on-one interviews with heads of state, intellectuals, and business leaders. His columns and cover stories — ranging from the future of the Middle East and America’s role in the world to the politics and culture of the global economy — reach millions of readers. Zakaria’s international bestseller The Post-American World is about the “rise of the rest,” analyzing the growth of China, India, Brazil, among others, and what it means for the future. The New York Times called it “a relentlessly intelligent book,” while the Boston Sunday Globe wrote, "Zakaria...may have more intellectual range and insights than any other public thinker in the West.” His previous New York Times bestseller, The Future of Freedom, has been translated into more than 20 languages and was called “a work of tremendous originality and insight” by The Washington Post.

Born in India and educated at Yale and Harvard, where he received his PhD, Zakaria became the youngest managing editor of Foreign Affairs at 28. He was the editor of Newsweek International from 2000 to 2010 and Editor-at-Large at TIME from 2010 to 2014. A favorite guest over the years on programs such as The Daily Show, Charlie Rose, and The Colbert Report, Zakaria is known for his good humor, wit, and unique approach to international relations that combines the knowledge of a historian and the theoretical command of a political scientist. Zakaria serves on the board of the New America Foundation. He has won the Deadline Club Award for Best Columnist, a National Magazine Award, two Overseas Press Club Awards, and the Padma Bhushan. His work has appeared in The New Yorker, The New York Times, The Wall Street Journal, and Slate. Foreign Policy magazine named him one of the Top 100 Global Thinkers. His latest book, In Defense of a Liberal Education, debuted at #6 on The New York Times best sellers list in April 2015.

GUIDELINES FOR ALL GUESTS

Arrive early, doors open at 4:30 pm
Pay-by-Space parking spaces are available (cash or credit card) in Lot 2. All day parking passes can also be purchased from an information kiosk for $12 (cash only).
No bulky video equipment or flash photography permitted.
Details for this event are subject to change.
Please check our website for last minute details prior to the event.

Parking will be available in Lot 2. From the 405 Freeway, exit at Sunset Blvd East. Follow Sunset Blvd and take a right turn at Hilgard Ave. Go straight, turn right onto Westholme Ave to arrive at the parking and information kiosk to your right. Purchase a parking permit for Lot 2 with the attendant, then enter into Lot 2 on your left.